The country of New Zealand is a member of Oceania or the Pacific Islands. a consortium of thousands of islands located in the Pacific Ocean.
New Zealand’s South Island and North Island are Oceania’s 2nd and 3rd largest islands, in that order. New Zealand is regarded as part of Polynesia, 1 of the 3 major Pacific Islands divisions.
New Zealand’s total land area is 267,990 square kilometers (103,470 square miles) approximately the same size as the British Isles or Japan.
Almost all of the country is made up of the South and North islands.

Cook Straight separates these islands. It is a canal flanked on the east by the South Pacific Ocean and on the west by the Tasman Sea. The islands are located along an area dominated by a southwest by northeast axis. From north to south, their length is approximately 1,600 kilometers (or 1,000 miles), and from east to west their maximum width is 450 kilometers (or 280 miles).
The Island of Rangitoto is a huge, volcanic cone which is now extinct on the harbor of Auckland. The Rangitoto Isaland summit is a popular attraction for tourists, offering panoramic views of Auckland City and the Hauraki Gulf.
The formation of New Zealand’s islands are mostly due to volcanic activity. Both extinct and active and volcanoes still make up most of the landmass of New Zealand.
Several small and broadly scattered islands are also part of the New Zealand territory. Some are uninhabited and tiny.
Stewart Island, one of islands that are inhabited, is the nearest and largest, situated approximately 30 kilometers (or 20 miles) off South Island’s southem shore.
Campbell Island is located about six hundred kilometers (or 375 miles) further south, and approximately 850 kilometers on the South Island’s east are the Chatham Islands. Tthe biggest island of the Kermadec Islands, Raoul Island is located over 900 kilometers (or 600 miles) on North Island’s northeast. 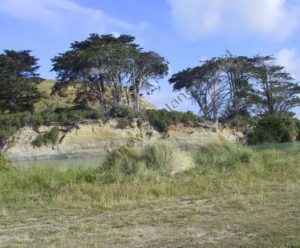 New Zealand’s highest point. Mount Cook or Aorangi (in Maori). is located in the South Island. It reaches a height of 3.754 meters (or 12.316 feet) in the Southern Alps’ central region. Eighteen other mountains that make up part of the chain have a height of more than 3.000 meters (or 10.000 feet). The Southern Alps spread out to approximately 500 kilometers (or 300 miles) which is practically the entire span of the South Island.
The chain’s western side rises at the shore, along a narrow piece of coastline sandwiched between the mountains and the sea. The chain’s eastern side gently slopes to an area of fertile plains and rolling hills. drained by several rivers which are glacier-fed.

Mount Cook houses the Tasman Glacier, the largest among the over three hundred glaciers located in the Southern Alps.
The Canterbury Plains in the east central form the country’s largest lowland region. On the south are the plains and hills of the Otago Plateau, which is flanked on the west by the Fiordland National Park wilderness. This is where the Southern Alps’ southern foothills join a rugged shoreline of fjords. or narrow and deep coastal inlets.